When talking about roaming charges, the major contributors people think of are the calling charges and the data usage charges. This incomplete knowledge of roaming charges is the reason; even the most careful people get bill shocks after their international trips. When trying to avoid international roaming charges, people end up controlling their phone calls and forget about other elements which are chargeable when using mobile phones. 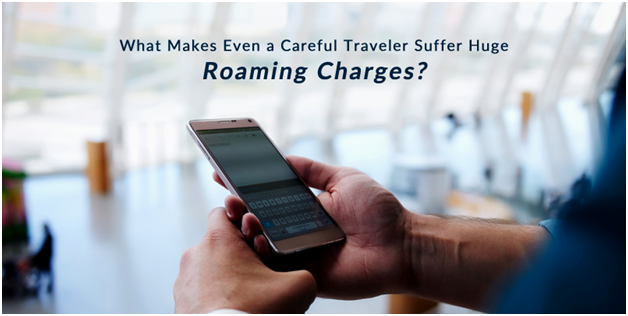 In today’s time, when mobile is our go-to device for almost every requirement from connecting with people to passing the time by playing games, searching for the information, shopping and socializing, you need to use it very carefully when traveling abroad.

In a foreign country, it is not just you who is treated like a guest or a visitor but your mobile phone is also a visitor. And using your mobile phone as a visitor proves to be more expensive with a huge mobile phone bill. When traveling abroad, one of the major concerns of the visitors is how to avoid international roaming charges.

One of the major requirements to avoid roaming charges is to understand actually what causes these huge charges. To help you minimize your roaming bill, we have provided a list of the elements that play a vital role in your bill shock. Just keep these charges in the mind and use your mobile phone accordingly to enjoy a memorable trip.

This is the basic one, which almost every mobile user knows. We all know that the calls we make in the foreign country are charged at the prices higher than in the domestic country. What people miss is the exact calling rate that you can easily check online or can confirm from your operator.

Though most of the people know it that incoming calls are also chargeable when in roaming, people innocently attend the calls believing that their luck might work and they won’t be charged. There can be chances that you don’t get charged for incoming calls when not in your region, but this happens only in home network. You cannot the same thing to happen in a different country. As far as roaming charges on incoming calls are concerned, these might vary in every country.

In today’s time when almost every mobile phone user carries a smartphone, the internet usage is the major culprit in roaming charges. Minor ignorance while checking emails, using social media or browsing other locations and the huge whole trip can convert into a nightmare after returning to the home country.

Yes, don’t be shocked; a simple message asking you to call back after some time can also take your phone bill to a next level. No matter how careful you are with your voicemail and data usage, opening a voicemail even by mistake can be charged. Though there is no clear information about the roaming rates for voicemail, you should be careful while checking the voice messages.

This is something everyone can control easily. You can either avoid sending texts when traveling abroad or can opt for a plan that might reduce the roaming charges. The point to remember is that, whatever you do, outgoing SMS are going to contribute to your phone bill.

So next time when you travel abroad don’t consider yourself safe only by putting a check on calls and data usage. Look at the whole truth and plan usage of your phone accordingly.

One thing is sure that you cannot turn everything off and cut off yourself from the loved ones. What you can do is to download Ajura app and stay in touch with your loved ones without thinking about International roamingcharges. This app helps you make calls from your local SIM and that too at the normal calling charges applicable in your country.

Should You Buy Unlocked Mobile Phones?

Making Personal Calls While At Work

Why International Franchising Is Best Option For Franchisors or Franchisees?

4 Mobile Accessories That Can Improve Your Smartphone Experience

Data Security On The Cloud Servers and Its Importance