What Does an Alibi Consist Of? 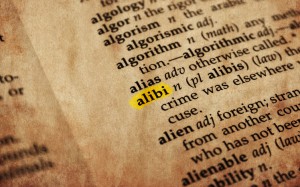 An alibi must have evidence that shows that he/she was unlikely to be in the place of the crime where he/she was accused of being in the first place. The evidence must state in the defense statement all the details that will confirm that he/she was not on the scene of the crime when it happened so he/she could not have committed the crime. An alibi defense may consist one or some of the following: a signed document, a video, credit card transactions, telephone logs, bank or credit card receipts, employment time card, and photographs.

If you are going to use the alibi defense, you must know that most courts require that you notify the prosecution. The notice of alibi requires a defendant to give a notice when he intends to use a witness. He / she must disclose who the witness is and where the accused was when the crime took place. It is the government’s obligation to notify the defendant when there is a witness so that the testimony can be rebutted. Failing to comply with this requirement may jeopardize the chance of the defendant to present the alibi defense on trial. The prosecution can interview the witness of the defense before the trial.

Seek Help of a Defense Attorney

The alibi defense can be one of the most effective defenses to criminal charges. To learn more about the alibi defense and how to build a strong case, it is best to consult a reputable defense attorney.

Written by The VanMatre Law Firm, one of the top criminal defense attorneys in Columbia, MO.

What Are The Attributes Which You Want In Your Criminal Law Attorney?

How to Apply for Credit Card