Tesla’s leader Elon Musk started to work on the other side of automotive market – buses, trucks and tractors. Of course, his planes are much global. Elaboration of new city buses, which will be smaller and more spacious, is a trifle on the autopilot introduction background.

But much more interesting question is about Semis. Ian Wright – one of the former engineer of Tesla Motors – is real contender. Wright speed company (guess who is a founder?) made garbage trucks, which are using onboard gas to charge batteries. Ian announced a deal with New Zealand’s company and diesel buses will be remade. 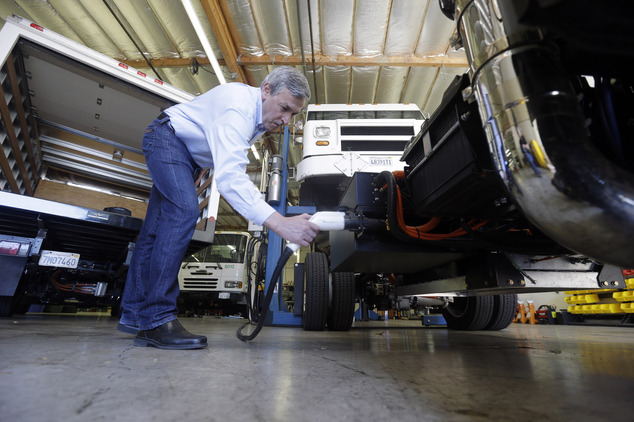 The most important step was done with due to California’s standards of hard emissions. The invented turbine doesn’t need catalytic converter and really very clean. In conjunction with huge difference in harmful bulk between trucks and passenger cars, it’s a first real helpful message. Interestingly, the controversy of development small ore huge automobiles became a crucial fact, when Wright decided to leave Nicola’s firm.

In the same time, 2000 horsepower Tesla’s tractor with 3700 lb-ft of torque don’t looks like a solution. Using gas turbine to charge 325 kWh battery and overcome 1,2 thousand miles – is birds of a feather. $2,3 preorder billons (7000 vehicles) wouldn’t solve even a problem of factory lack (both mechanic and battery), and it’s beside the point of full electrical resolution.

But it’s not the time to sprinkle ashes upon one’s head. Solving a problem of the cost, weight and size is a Tesla’s vocation. We can be sure, that Musk’s great plan are been implementing just now. It wouldn’t be a surprise, if we’ll see something unbelievable to the end of decade.

The pollution of big trucks is a serious problem. Ten years or even more, they are contaminating the atmosphere. Such a period without replacing, exhaust pipes emit toxic components and carcinogens overcoming millions of miles. The decision in this sphere certainly will be the great news for the nature and Elon’s accepted target could be a good start. Surely, this company will be a pioneer in solving this global problem.

Gas Smokers: Features, Pros and Cons You Should Know

How Much Gas Do You Really Have Left?

The Dos and Don’ts Of Dealing With An Auto Mechanic