Hi all. Today we are here with something more interesting which our heading would have already suggested you. Yes! In this blog we will be discussing already released Apple’s iPhone 6 plus and Samsung’s yet-to-release phablet- Galaxy Note 5, to be released in September 2015. 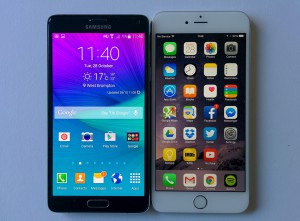 In this fast-advancing era, tech market is flooded with smart phones. You can witness new smartphone coming in every now and then. However, every smart phone manufacturer doesn’t provide you with all the features that you need or the satisfaction that you want after spending your hard-earned penny. When it comes to full utility or happiness of a smartness kind of thing, only two renowned names revolve in our minds…do I need to mention them??? You know it right!! Yes you guessed it correct, it’s the Apple and Samsung. Both are constantly in fight with each other to attain the top status of a technological leader, every time giving a tough competition to each other. This competition between these top most esteemed firms has put its buyers in dilemma of what to pick up in between Samsung galaxy note 5 and iPhone 6 plus.

So worry not! Here we come your Tech buddies to help you out. Today we will try to mark out the differences between the two phablets so that it becomes little easier for you to make your decision.

So this was all about its important features. Now just to say a line about the price,we would like to mention that there is not much of a difference. The price of both the smart phones is more or less similar, falling approximate around $500-600.

This was all we had to say. We hope we have been able to help you out in making a correct decision by putting all fair comparative features.

May you have an amazing experience!